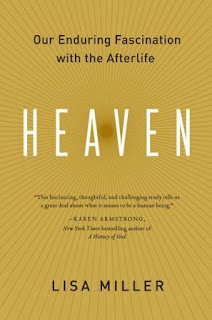 Heaven: Our Enduring Fascination with the Afterlife by Lisa Miller is an intellectual history of the concept of heaven in the Christian, Jewish and Muslim faiths, with an emphasis on its development and importance in Christianity.
Miller's style reminds me of authors Lee Strobel and Bruce Feiler, journalists who write about religion and faith by combining literary research and interesting interviews with experts from a variety of fields whose viewpoints expand and deepen the reader's understanding of the subject.
Lisa Miller states her own bias in the Introduction. She was raised in an non-observant Jewish family and is married to a former Catholic now "turned nonbeliever". She says " like so many Americans, I approach religion from an uneasy, untraditional place, and like so many I have struggled with what I believe about heaven." Many readers will identify with her struggle. Miller has devoted her career as a journalist to reporting about religion and is an editor at Newsweek where she writes regularly on the subject.
Heaven is thoroughly researched and well-written. It begins with the origins of the concept of heaven in the pre-Biblical Middle East and follows the development of the concept throughout history by Jewish, Christian and Muslim believers. It is fascinating to trace the changes in the idea of heaven through the ages and cultures. The heaven of the early Christians differs from the heaven of the medieval period and the heaven of the Reformers and the Puritans.
Miller skillfully weaves personal anecdotes and interviews with religious and scientific experts throughout the book which makes the text lively and relevant, although backed by sound scholarly research (just check out the tables of footnotes in the back of the book!). I thought her chapters on the development of the concept of resurrection and the debate over salvation were particularly enlightening. She does delve into the subject of near death experiences with those who claim to have seen heaven as a result and with scientists who proffer their explanations for this phenomenon.
I'm one of those Miller identifies as not giving a lot of thought to heaven, probably because my religious tradition (Presbyterian) does not emphasize it nor encourage speculation about what it will be like, although we believe in it. This book did not change my viewpoint, but reinforced it. I join with Maimonides (quoted in Heaven) who echoes St. Paul in saying "As to the blissful state of the soul in the World to Come, there is no way on earth in which we can comprehend or know it."
I highly recommend Heaven to my Gentle Readers! This is one you will want to keep on your bookshelf and would make a great study for an adult class or book club.
(I was given a copy of this book by TLC Book Tours. for  Harper Collins. I did not promise a favorable review and did not receive any other compensation for writing this review.)
Other reviews by blogging friends:
Church for Starving Artists
Posted by Jody Harrington at 6:35 AM

Thanks for this wonderful review. I had been wondering about this book; now I will read it for sure.

I have found many friends in my own circumstances who have clear, concrete, and comforting (to them, anyway) ideas about heaven, and are surprised to find that it's not a particular focus of mine. I am very much with Paul and Maimonides on this one.

Interestingly, and I don't think this is unusual, my father, who as you know has been widowed three times, has in the fresh grief of a new loss, expressed hopes of a reunion that looks very much like life here - good parts only, of course. But later, in discussions with religious friends, he will say, "Which of my four wives do you think I would end up with?" - to which they have no response. (Sound like a familiar question?)

I believe that part of accepting the mystery, which I am the last person to say is easy to do, is to come to terms with the promise that heaven, eternal presence in the glory of God, whatever that means, is far more joyful than anything we can imagine here -- which is not all that comforting in that it does not incorporate our ideas of reunion with loved ones in the limited ways in which we are able to describe our mutual presence with God. It really stretches our capacity for hope and confidence to accept that now we see only through a glass darkly.

It was a wonderful post, Robin! You ought to put it on Metanoia. Thanks so much.

"It really stretches our capacity for hope and confidence to accept that now we see only through a glass darkly." What a profound statement!

QG I love your book reviews. I agree that this is a keeper.

I like the comparison to Lee Stoebel - I've read a few of his books and really enjoyed his style.

Thanks for being on the tour!

ooh, this does sound interesting. Thanks!